In 2018, the world is going to see one of the largest supply/demand imbalances in history.

Canadian Prime Minister Justin Trudeau will legalize cannabis by Canada’s 151st birthday, Canada Day, on July 1, 2018, and with the legalization will come a wave of demand for the product, both for medical purposes and recreational.

Already, however, and under the current laws that only allow for medical cannabis consumption, growers, distributors and retailers struggle to satiate the market. As CBC reported back in June, 2017:

“Licensed medical marijuana producers are trying to keep pace with extraordinary growth in the number of patients signing up for Health Canada’s legal regime.”

Analysts expect that the recreational market will treble the current market in Canada alone to $8 billion – and the industry is struggling to meet demand now.

“In order to meet the low end of the estimates for the adult-use market, Canada would have to produce over 600,000 kg of cannabis a year. This is a significant increase over current levels and has sparked a rush to build new grow facilities.”

Of course, for investors, a supply crunch can be an incredible opportunity. Take a position in a company that’s set up to help remedy the supply/demand imbalance and you could be looking at explosive returns in a very short period of time.

With this opportunity in mind, our team of analysts set out to find a stock that is positioned to take advantage of the situation and that also – right now – remains somewhat under the radar, maximizing the potential for gains over the next twelve months.

And we found one – Cannabis Wheaton Income Corp (OTCMKTS:CBWTF).

But this isn’t your standard cannabis company, it’s much more than that, and that’s why we like it so much.

A unique model… sort of

Anybody familiar with the mining industry – gold, silver, etc. – will likely already be familiar with the streaming model. For those that aren’t, it’s a system through which one entity finances a natural resource explorer, miner or producer in return for a royalty derived from, or a set amount of, the natural resource that comes out of whatever operations are in place.

The benefits of this model are relatively straightforward. Mining and natural resource production is capital intensive but mining companies, and especially the younger ones, can often only gain access to the capital they require on unfavorable terms. Additionally, if they raise through the equities markets, shareholders will often get heavily diluted.

The cash that streaming companies provide is generally nondilutive and it’s on terms that are far more favorable to the miner or producer that needs it.

Why are we rambling on about gold mining?

Well, here’s the thing – Cannabis Wheaton has taken this model and applied it to the cannabis industry. That’s why it’s (sort of) unique.

The company gives cannabis growers and producers money to fund their operations in return for a share of what’s grown and harvested. It also acquires entities in the space and is currently building out a large and well-established distribution network (more on both of these points shortly).

There’s an old saying that goes something like this:

If you want to make money, don’t waste time reinventing the wheel – take something that works in one industry and apply it to another.

And that’s exactly what CBWTF is doing.

There’s no time to hang around as the supply crunch is just around the corner and so one of the criteria we stipulated when our team set out on a search for a top opportunity in this space was that it was already established as a big player and that it was taking numerous, decisive steps towards increasing its presence in the North American cannabis market.

Cannabis Wheaton ticks both of these boxes.

Take a look at some of these recent developments – all achieved during the second half of this 2017:

Cannabis Wheaton Income Corp. (TSX VENTURE: CBW) (“Cannabis Wheaton”, “CW”, or the “Company”) is happy to announce that it has entered an exclusive distribution alliance with the corporate owner of a national chain of independent pharmacies (the “Pharmacy Group”) to develop and implement medical cannabis distribution and retail sale opportunities at all Pharmacy Group locations (collectively, the “Responsible Retailing Program”).

Cannabis Wheaton Income Corp. (TSX VENTURE: CBW) (“Cannabis Wheaton”or”CW”) and Beleave Inc. (CSE: BE) (CSE: BE.CN) (CNSX: BE) (OTCQX: BLEVF) (“Beleave” or the “Company”) are pleased to announce that they, along with Beleave’s wholly-owned operating subsidiary Beleave Kannabis Corp., have entered a definitive agreement whereby Cannabis Wheaton will provide Beleave with up to $10,000,000 in non-dilutive debt financing by way of an instrument evidencing a debt obligation repayable in product equivalents (the “D.O.P.E. Note”). The proceeds of the D.O.P.E. Note will be used by Beleave to fund the construction of an expansion facility which will be situated adjacent to Beleave’s current facility outside of Hamilton, Ontario.

Cannabis Wheaton Income Corp. (d/b/a Wheaton Income) (TSX VENTURE: CBW)(“Cannabis Wheaton” or the “Company”) is pleased to announce the closing of the acquisition (the “Acquisition”) of all of the issued and outstanding shares of RockGarden Medicinals (2014) Inc. (“RockGarden”) pursuant to the terms of a definitive share purchase agreement (the “Share Purchase Agreement”) dated October 31, 2017 (the “Closing Date”).

Cannabis Wheaton Income Corp. (d/b/a Wheaton Income) (TSX.V:CBW) (“Wheaton Income” or “Wheaton” or the “Company”) is pleased to announce that it has entered into a letter of intent (the “Agreement”) with FV Pharma Inc. (“FV Pharma” or “FV”), a licensed producer pursuant to the ACMPR having received its cultivation license on October 13, 2017. Under the terms of the agreement, the Company will develop all aspects of FV’s cannabis cultivation facility in mutually agreed staged phases (the “Facility Development”), creating the largest indoor cannabis cultivation and processing facility in the world.

When a company employs this sort of model, in whatever industry, a few things are very important. At the top of the list is the experience, industry knowledge and network reach of the team that’s steering the ship.

And this is yet another box checked for Cannabis Wheaton.

And there are more big names on the list.

Check out the entire team here.

Unfortunately, we weren’t the first ones to recognize the incredible positioning of Cannabis Wheaton in this industry. Luckily, however, those that beat us to it in the business of highlighting incredible opportunities to traders and investors.

Instead, it was the panel of judges at the 2017 Canadian Cannabis Awards gala, which was held at The Carlu in Toronto earlier in 2017.

On December 4, Wheaton Cannabis announced that it was awarded Startup of the Year at the awards. The Canadian Cannabis Awards are styled as an annual celebration recognizing the people, companies and products that make it great. The majority of awards were decided by the public and a select committee of industry stakeholders.

This means industry insiders as well as members of the public (so, the people that are going to be buying the cannabis that CBWTF is funding the growth of) recognize what Cannabis Wheaton is trying to do (and very much succeeding in doing) in this industry right now.

There’s still time… but not much.

As we’ve said, luckily for us, markets are yet to fully latch on to this opportunity and Cannabis Wheaton remains somewhat under the radar. It’s not going to stay that way for long, however.

Take a look at the chart below and you’ll get a sense of what we’re talking about: 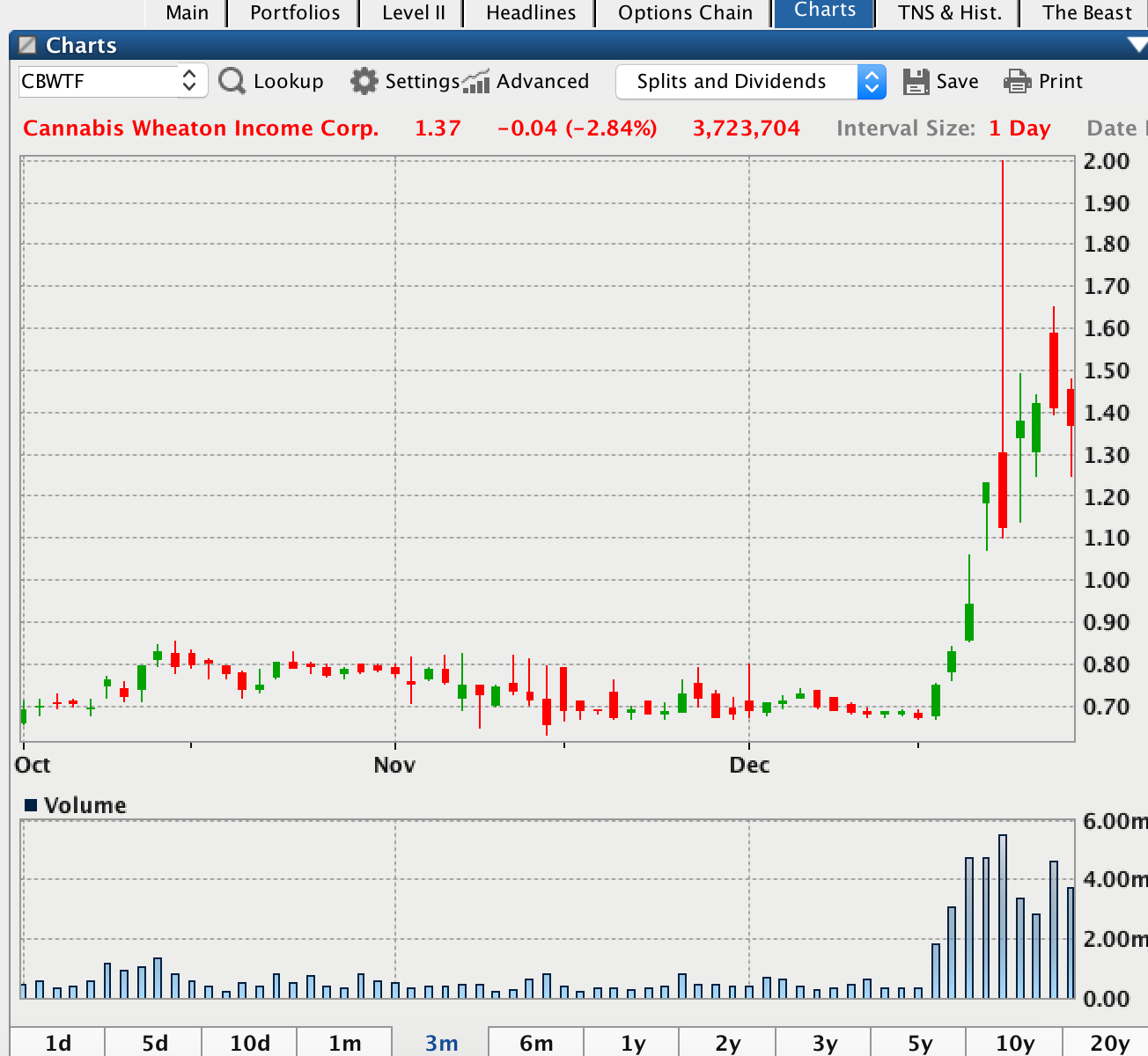 As the chart illustrates, the final two weeks of 2017 brought with them a large influx of volume for the company and, with it, a spike in Cannabis Wheaton’s share price to more than $2 a share.

This could be just the beginning of a much larger upside revaluation and, right now, the company’s shares are available at a circa 30% discount to December 2017 highs.

So let’s sum up the opportunity here.

Here’s why you need to put this company on your watchlist right now:

So what are you waiting for? Start your research today and make sure you don’t miss out on this incredible opportunity. You’ll be glad you did.

This is not investment advice. All individuals should verify all claims and perform their own due diligence on ​​EVA (and / or any other mentioned companies and / or securities), and read this disclaimer in its entirety.

Small Caps Daily does not recommend that the securities profiled should be purchased, sold or held and is not liable for any investment decisions by its readers or subscribers.

By using Small Caps Daily, you agree, without limitation or qualification, to be bound by, and to comply with, these Terms of Use and any other posted guidelines or rules applicable.

You agree to indemnify and hold Small Caps Daily, its officers, directors, owners, agents and employees, harmless from any claim or demand, including reasonable attorneys fees, made by any third party due to or arising out of your use of the website, the violation of these Terms of Use by you, or the infringement by you, or other user of the website using your computer, of any intellectual property or other right of any person or entity. We reserve the right, at our own expense, to assume the exclusive defense and control of any matter otherwise subject to indemnification.

Small Caps Daily, reserves the right, at its sole discretion, to change, modify, add and/ or remove all or part of this Disclaimer and / or Terms of Use at any time.